Self-myofascial release, or foam rolling, has been touted as the method of priming and recovering muscles. But what is it actually doing? How does it work? When should I “roll out”? Let’s get into all of that and clear up all confusion about foam rolling and how it can benefit you.

Anatomy Brief: What is Fascia?

Before we start talking about foam rolling, it’s important to have an understanding of fascia. Fascia is a commonly overlooked part of the body. Scientists are even debating whether or not it should be its own body system, so it must be important, right?

Fascia is connective tissue that covers every body structure within us—including muscle. Fascia connects one area of the body to another. For example, our body has what’s known as the “posterior sling.”

This sling consists of the latissimus dorsi and the opposite side gluteus maximus muscle that are interconnected by the thoracolumbar fascia.  This fascia crosses the middle of the body around the level of the spine meets the tailbone. This is amazing, because when one of the muscles in this sling is activated, the other muscle is too.

However, this can also be a problem when one of the muscles and surrounding fascia are tight in the sling. This concept does not just apply to the posterior sling; there are connections between all of the muscles in the body.

Problems in this fascial system typically become evident when we experience taut bands of muscle tissue or restricted range of motion around a joint. Some people also experience muscle soreness. How can this soreness be prevented? How can this muscle tightness be relieved? Enter, foam rolling.

Foam Rolling: How Does it Work?

Foam rolling is a form of self-massage, in which targeted muscles are rolled and compressed using an external device.  This device may be the well-known foam rollers that are seen around fitness clubs, or a massaging stick, ball, or wedge. There are several theories behind how these devices work with implications on the quality of the muscle, the nutrients provided to the muscle, how nerves communicate with the muscle, and how our thoughts affect the process.

Physiologically, it’s possible that localized compression causes a minor inflammatory response. As a result, this could both increase blood flow and nutrients to the area. It may also bring substances that break down trigger points.

On a neurological level, it is possible that rolling can impact nerves in a way that reduces pain perception. While foam rolling may decrease pain, it may increase and improve nerve signaling to the muscle, causing muscle performance to be more efficient.

Psychophysiology looks at the relationship between the body and the mind. It is possible that the act of foam rolling combined with a belief in its effectiveness, could be enough for it to work.  In other words, the body is triggered to produce the required responses to exercise for good recovery.

There is no definitive answer as to how foam rolling works to produce the effects seen. In reality, it is likely a combination of the theories above. The great news is that regardless of how it works, there is evidence to support that it does have effects on muscle performance and recovery. Let’s get into it!

The Effects of Pre-Performance Foam Rolling

Many studies have observed the effects of pre-rolling with regard to sprint performance, jumping, flexibility, and muscular strength. These studies stem from the neurological theories regarding foam rolling. The idea is that rolling prior to performance primes the neuromuscular system to work more efficiently. Studies observing how foam rolling affects flexibility on the other hand, lean toward the mechanical theories of altering tissue quality.

—The Bottom Line: foam rolling prior to exercise can increase flexibility, improve sprint performance, and does not have an impact on jump height and muscle strength.

The Effects of Post-Performance Foam Rolling

When we look at post-performance foam rolling, the evidence focuses more on muscle recovery, reduction of muscle soreness, and pain perception. Eliminating knots and reducing stiffness decreases the feeling of muscle soreness. A small inflammatory process may allow the muscle to recover more quickly due to having nutrients more readily available. Furthermore, a person who believes that foam rolling will reduce muscle soreness post-exercise will likely perceive reduced soreness/pain. Let’s see how well these thought processes hold up.

—The Bottom Line: foam rolling after exercise can reduce muscle soreness and muscle pain, and can reduce recovery time between explosive bouts of activity.

This study showed that participants in the vibration foam rolling group had significantly less muscle soreness and increased localized flexibility compared to the non-vibration foam rolling group. This study also looked at several other factors, including pressure-pain threshold, oxygen saturation, jump performance, and hip and knee range of motion. None of these factors differed significantly between groups.

Gaps in the Literature

The research behind foam rolling is few and far between. However, there are quality articles and studies out there that inform when and why it is used. One of the major gaps in the literature is a protocol for using the roller.

Is it continuous, or should you rest on the sore spots? What pace/tempo should you be rolling at? How long should you foam roll for? What density of foam, or self-myofascial release product is ideal?

Unfortunately, I do not have the answers to those questions at this point. Different schools of thought train different methods. There is yet to be any evidence claiming one method as superior. One way to begin sifting through the techniques is talking to a trained professional. Physical therapists or other movement specialists can point you in the right direction based on your purpose for foam rolling and your body’s needs.

Tips, Tricks, and the Basics

Finally, we have a lovely image library of major muscle groups that you can roll out! These come from “Self-Myofascial Release Techniques” by Michael Clark, MS, PT, PES, CSCS and Alan Russell, ATC, NASM-PES, CSCS. Enjoy!

Position yourself side lying on foam roll with your bottom leg raised slightly off floor. Maintain head in “neutral” with ears aligned with shoulders. Roll just below hip joint down the outer thigh to the knee. 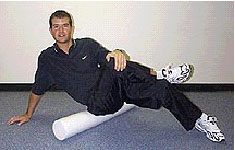 Begin positioned as shown with foot crossed to opposite knee. Roll on the back of the hip (gluteal) area. Increase the stretch by pulling the knee toward the opposite shoulder. 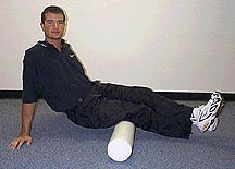 Place hamstrings (back of the thighs) on the roll with hips unsupported. Cross your feet to increase leverage. Roll from knee up towards buttocks while keeping legs straight.

Position your body as seen above on forearms with the front of the thighs on the foam roll. It is very important to maintain proper core control (abdominal drawn-In position & tight gluteals) to prevent low back compensations. Roll from your pelvic bone to knee, emphasizing the outer thigh area.

Position your body as shown above with the roller placed just to the outside of the front pelvic bone (ASIS).

Extend the thigh and place foam roll along the inner thigh region and roll up to the groin area with body as positioned above. Be cautious when rolling near the groin area into the pelvis.

Position yourself side lying with arm outstretched and roller placed under the arm area and slightly back towards outer shoulder blade. Make sure your thumb is pointed up to pre-stretch the muscle. Movement during this technique is minimal.

Cross arms to the opposite shoulder to clear the shoulder blades out of the way. While maintaining abdominal activation, raise hips until unsupported. Also stabilize the head in “neutral.” Roll mid-back area on the foam.

Talk to a PT on the Phone