Running is a growing industry. It’s a great workout, readily available to all, and inexpensive. The more people that begin to run, though, the more inexperienced runners there are. And with a lack of knowledge comes injury. This can include knee pain, low back pain, hamstring strains, and IT Band Syndrome just to name a few. In fact, between 37-56% of recreational runners suffer from a minimum of one injury each year¹.

Whether these stem from trauma or personal overuse, these pains are sure to put a damper on someone’s ability to run or train. Overuse injuries can often be avoided, so it’s important that you are familiar with proper running mechanics, especially related to your running stride. Sometimes, issues with your stride, such as overstriding, can result in increased fatigue and potentially pain.

What You Need to Know About a Normal Running Stride

Before getting into overstriding, you must first understand the parts of a runner’s stride. The running or gait cycle can be broken up into two main phases. One phase is known as the stance phase, which is where the foot is in contact with the ground.

On the other hand, the swing phase occurs when the foot is not in contact with the ground. So for most of the cycle, when one leg is in stance phase, the other leg is in swing phase.

When studying running injuries and performance, most movement specialists and researchers focus on the stance phase of gait.  This is because in this phase the body is bearing weight and additional forces are involved. Typically, there are four stages of a stride: initial contact, braking and absorption, midstance, and propulsion. Each are important in contributing to a balanced and pain-free stride. 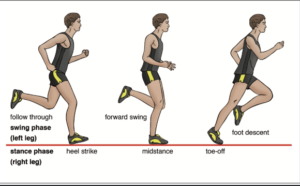 The place of contact determines how the remainder of the stride will follow, thus is the first step to recognize when attempting to stop overstriding. For example, if you land on the heel of your foot, your body will have to compensate differently than if you start out with the forefoot.

The next step in the runner’s stride equation is braking and absorption. As your body begins to advance throughout your stride, you start placing more weight on a single part of your foot at a time. The foot then has to absorb, and essentially break the impact, of the contact.

When the foot collapses, or pronates, and the leg bends, your body controls the effect of the shock caused by gravity on the joints. After absorbing the impact, your legs can begin to move you forward.

Midstance is the first step before propulsion and involves supporting your body’s weight on a single leg. This leg is often known as the stance leg. When you run, this phase represents the point when the total weight of your body is on just one leg as you’re swinging your other leg through.

Think of  a spring: once the weight is applied to the spring, the shock is absorbed. Your foot must be able to support the full gravitational weight of your body in order to continue through the stride.

The final phase of running is propulsion which ends in toe-off. When you think of a propeller, you may picture a helicopter soaring through the sky. These propellers are the reason helicopters can move so quickly and efficiently. In the same way that helicopters move, runners must be able to propel themselves.

Propelling is essentially the act of moving forward. In a running stride, this is seen as the ankle, knee, and hip extending in a way that the body is pushed upwards to leave the ground, known as toe-off. The cycle then repeats again using the other foot, and it continues to alternate for the length of the run.

All of the above steps are part of a runner’s stride. Each runner may have their own unique stride features, but typically, the four phases are present. If they’re not, it’s possible you are overstriding, which can cause serious issues for the body.

If you think you may have poor running mechanics or may overstride, a running analysis is a must! Check out In Motion PT’s return to running page for more info.

Also, stay tuned for In Motion Physical Therapy’s next blog post for more tips! In the meantime, give us a call to schedule your running analysis to improve your running stride and efficiency.

Talk to a PT on the Phone